After studying at the Ecole des Arts Décoratifs in Geneva, Frederic Fivaz worked in the Swiss graphics industry for a spell, and then he hit the road. His travels eventually brought him to Canada, where he met his future wife. He decided to settle down in Montreal for two years, and while working as a member of the Sub Communications team, he discovered a love for typographical design.

In 2004 he returned to Geneva, where he continues to work as a graphic designer, now with a focus on illustration. 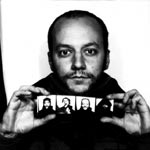