Garrett Boge has over thirty years of professional lettering and type design experience.

He began his career as a lettering artist and type designer at Hallmark Cards in the early 1980s, leaving to establish his own studio, initially in Kansas City and later in Seattle. Acquiring a Macintosh in 1986, Boge was one of the first independent type designers to embrace desktop font development tools, and start his own digital foundry — LetterPerfect. In the ensuing years, he has designed more than a two dozen original typefaces and produced over a hundred custom and proprietary faces for major companies such as Apple, Microsoft, Adobe, Hallmark and Disney..

Boge now lives and works out of his home in Palm Springs, California. 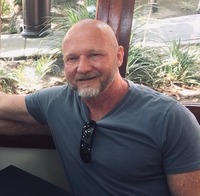