Type designer from Denmark, since 2000 in partnership with Scott Williams as the design studio A2/SW/HK in central London. Custom type, designed by the pair, usually makes an appearance in their work.

Henrik recently worked with Margaret Calvert on a refreshed and expanded version of her alphabet from the 1960s which saw nationwide use with British Rail, BAA, and the NHS. New Rail Alphabet, the new family of 6 weights, was released in 2009. 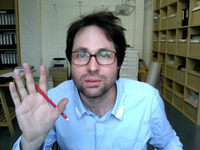