Joseph Churchward (foundry: Churchward Type) was born and raised in Samoa. He moved to New Zealand at age 13 and attended Wellington Technical College. There he concentrated on art and especially lettering. He then went on to work as a commercial artist at Charles Haines Advertising for 12 years before setting up Churchward International Typefaces in 1969.

His first breakthrough was not long in coming. Berthold Fototype accepted several of his first typefaces for distribution and continued to add Churchward’s new designs to their catalogue for many years. He later went on to sign distribution agreements with D.Stempel AG, Dr Böger Photosatz GmbH/Linotype, Mecanorma-Polyvroom B.V and Zipatone. Churchward International Typefaces published a handful of original fonts in 1978 being the first and only company in New Zealand to publish original photo-lettering.

Now officially retired, he continues to create unique alphabets and has over 300 original faces to his name. 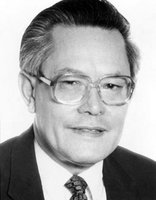