"Seriously...type design was the furthest thing from what I thought I would be doing right now...I wanted to be an architect or tailor...I ended up a historian with a lot of fonts and a side business creating party flyers...but when I saw that I could not only define the world I live in with letterforms but also give a much needed voice to those languages and cultures that have been set aside by many type designers...I really found what I wanted to do...I guess having the aspirations and skills of and architect mixed with the knowledge of a historian on top of a love for fashion and the graphic arts makes you a pretty good type designer."

Even as a small child, Kwesi had always had an interest in the alphabet and foreign typography but never truly realized it until seeing firsthand how the typographic process worked by sitting in on many of the Visual Communications classes taught during evenings at Recitation Hall on the campus of the University of Delaware. Those classes not only cultivated his interests in the fundamentals and beauty of design but also the determination to start his own graphic/web/type design studio which has grown to become both AKOFA Creative and AKOFAType.

His family, his Ghanaian-American heritage and the sights, sounds and living of everyday life are among his most important influences. Amuti now resides in Atlanta where his most recent focus is to establish one of the city’s only full service type design studios. 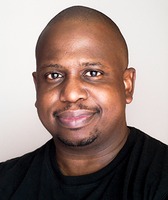 5 font families by Kwesi A. Amuti