Marie-Thérèse Koreman studied at the Royal Academy of Arts in 's-Hertogenbosch, The Netherlands. She is a co-founder of Visualogik Technology & Design bv and is director of design for Neufville Digital. She has been involved in digital type since 1981, mainly for corporate identities for large companies and global players. From 1997 she and her team have been working on the digital version of the ever expanding Futura typeface.

For Traffictype, a Visualogik special brand, she developed the main stream of digital road signs and typography that have become the standard reference in The Netherlands. 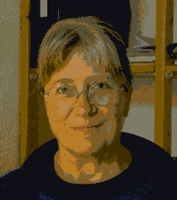