Naghi Naghashian was born in Teheran. After completing his school education in Iran,he studied illustration and book design at the Hochschule für Gestaltung (HfG), an academy of design, in Offenbach, Germany. Thereafter he was engaged as art director in various advertising agencies in Germany, Switzerland and England. He also worked as a freelance graphic designer with focus on illustration and brand designing for leading producers of brand articles in Europe, and also for broadcasting stations in Germany and other European countries.

He was occupied with theoretical work in the field of color and research in the passive perception of color and “after image” phenomena. He carried out an analysis of the letters of the Arabic alphabet and a definition of their structure, enabling him to design a number of modern types of Arabic script.

The publication of the illustrated quatrains of Omar Khayyam is his most recent project. He devoted five years of intensive and creative study to produce the book. 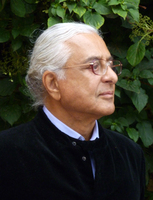