René Bieder is an art director, graphic designer and type designer, born and raised in Berlin. “My roots are in advertising and graphic design,” he said in his 2014 interview for Creative Characters, “that’s what I did before I discovered the field of type design. Speaking generally, I simply love designing. I know that sounds cheesy, but to start with a blank page and to see the result after months of hard work is very satisfying to me, no matter if it’s a type family, a corporate design, a campaign or a website. I never intended to focus on one single thing, and I feel at home in different disciplines.”

Establishing his foundry the moment he published his first typeface to MyFonts, René has been on an upward trajectory ever since. His designs are powerful, unadorned, straightforward, and well-made. So much so in fact, that two of his font families, RBNo2.1 and Quadon, were featured in our Most Popular Fonts of the Year lists in 2012 and 2013; a fact that surprised no one more so than René, himself. “Originally, all I really wanted was to pursue my personal desire and simply make a font family of my own,” he said. “After I had completed it, I was not even sure if I should offer it for sale. Of course, the reactions to Quadon and RBNo2.1 were phenomenal — it was hard to believe that something that had started out as a side project could be so successful!”

So, what’s next for René Bieder? “Well, besides training my eyes and learning more about typography, I definitely want to give serifs a try. This is the next big step for me, similar to exploring neutral typefaces. I have already got some drafts waiting for some attention. That’s the great thing about typography: the deeper you dive into it, the more you recognize that there is so much more to discover.” 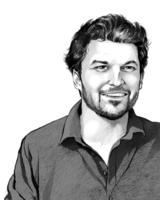