Ryan Martinson runs Yellow Design Studio, a type design and fine arts studio, with his wife Rena. Based in Sanibel, Florida, Ryan and Rena have found a way to blend two very different mediums of design into a single, very successful business.

Since the premiere of his first font, Magesta Script, Ryan has continuously produced high-quality and immensely popular fonts. In fact, in 2012, two of his fonts, Veneer and Anodyne, were celebrated on MyFonts Most Popular Fonts of 2012 list. And those aren’t the designer’s only typefaces receiving recognition: over half of his fonts have been featured in our Rising Stars newsletter. 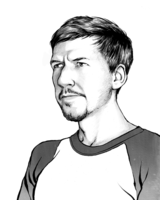