Ursula Suess was born in 1924 to German parents in Camden, NJ, and grew up in Munich, Germany, where she attended two semesters of design school at the Academy of Fine Art before it burned down during the war. She then studied calligraphy with Anna Simons for two years. She returned to America in 1946 and established herself as a graphic designer working for Oxford University Press, Macmillan Co., Harper, and other publishers. She also taught calligraphy for 20 years at the Westchester Art Workshop, and at the Cooper Union in New York City.

In her 50s she learned to cut gems and eventually became an accomplished gem carver. She moved to Green Valley, AZ, in 1998, and has been applying her artistic versatility with clay, water-color and acrylics.

In 1972 she designed Book Jacket Italic, one of film type era’s most famous typefaces. In 2010, she released the revised and expanded digital version through Canada Type. 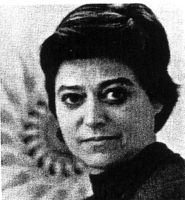