Kostić Type Foundry is located in Belgrade, Serbia. It is a small private foundry, run in cooperation between Zoran and Nikola Kostić (father and son).

Zoran began making fonts in 1987 out of necessity, since his DTP studio needed PostScript Cyrilic fonts which, at the time, were being made by no one. While designing his first font, he discovered a whole new world whose beauty and complexity wove such a spell over him that he’s under its hold to this very day. He created a number of original typefaces like: Batke, Beograd, KosticSans, KosticSerif, Lapidary Capitals, Sketch, DesignerRound, Why Square (licence by Linotype) and Just Square (licence by Linotype) and about ten others, designed on the basis of Old Church Slavonic scripts (Hilandarski Ustav and Monah with 6,400 characters each).

Nikola grew up playing and learning in his father’s DTP studio, where he was surrounded by the amazing world of the late 80’s and early 90’s graphic design, a period when technological breakthroughs opened up new possibilities for everyone in the business. Naturally, he became a
graphic designer. He got his master’s degree in graphic design from the Faculty of Applied Arts (University of Arts in Belgrade) in 2002. However, type design was a different story. This peculiar and seemingly uninteresting craft was something he grew to love only when he was in his thirties and years into the business. He had to push himself hard so as to develop the discipline required to master this particular art. By 2016 he has designed more than a dozen typefaces.
Among his most well known typeface designs are Breakers, Argumentum and the awarded Chiavettieri. Once mystified by his father’s craft, Nikola is now his proud partner at Kostić Type Foundry.

Kostić Type Foundry is located in Belgrade, Serbia. It is a small private foundry, run in cooperation between Zoran and Nikola Kostić (father and son). 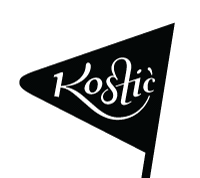